September 15, 2020–Chicago, IL–As the COVID-19 pandemic takes a toll on government budgets across the country, state and local leaders are searching for ways to supplement revenues. Policymakers in New Mexico, New York, and Pennsylvania have expressed interest in legalizing recreational cannabis to generate additional funds. However, economists at Anderson Economic Group caution that legalizing recreational cannabis is not a panacea for the immediate shortfalls most states are facing.

“Legalizing pot is not a quick fix for COVID-19 budget woes,” notes Andrew Miller, a senior analyst with AEG. Miller cited three key considerations policymakers should keep in mind as they search for new revenues to mitigate budget shortfalls. Cannabis legalization has been a multi-year process in most states. And even when markets are fully operational, cannabis taxes generally constitute a small portion of state revenues overall. Furthermore, legalization can reduce alcohol and tobacco tax revenues as some consumers switch to cannabis, meaning that not all cannabis tax revenue is truly “new” revenue.

There is often a significant time lag between legalization and the first actual cannabis sales. Miller shares, “It can take a year or more for states to establish regulatory agencies and for cannabis cultivators and dispensaries to obtain licenses and set up shop. States don’t begin collecting cannabis tax revenue until that process is complete.” In eight of the eleven states that have legalized recreational cannabis, the first dispensaries did not open until at least a year after legalization. 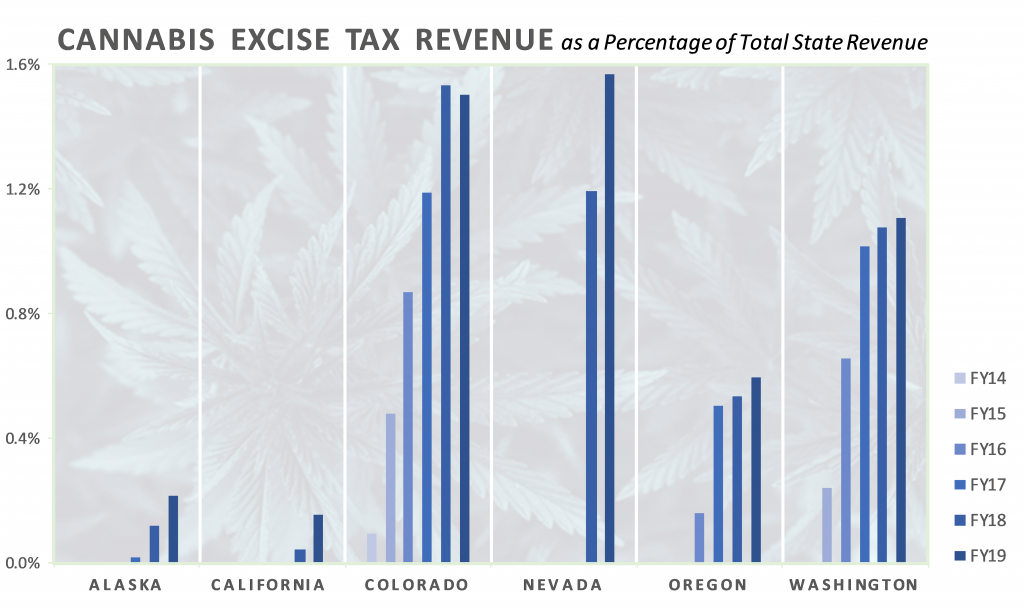 Notes: State revenue calculations exclude transfers from the federal government. Aside from Nevada, the first year of cannabis tax revenue for each state is a partial fiscal year, as the markets did not open in the first month of the states’ fiscal years. FY 2019 total revenue was estimated for California from the state budget since the FY 2019 CAFR was unavailable. Though 11 states have legalized recreational cannabis, the states displayed above are those that report cannabis excise tax revenue for fiscal years prior to FY 2020.

Even if states legalize cannabis and establish a market, there is no guarantee that cannabis sales will generate exclusively new tax revenues for their state. There is strong empirical evidence that some alcohol and tobacco consumers switch to cannabis once it is legal, reducing alcohol and tobacco tax revenues. As a result of this “cannibalization” effect, a portion of cannabis tax revenues consist of funds that have simply shifted from one source to another. Miller notes, “Policymakers need to take cannibalization into account when estimating the increased revenue legalized cannabis might generate.”

State governments are not alone in turning to cannabis to help boost tax revenues. Some local governments that previously banned recreational cannabis sales within their borders are reconsidering their stance. “We have seen local governments that were opposed to recreational cannabis reverse course and allow sales within their borders once the pandemic began to impact their budget,” said Miller. “These tax revenue streams can be established relatively quickly, since statewide regulations and markets are already in operation.”