New geographic analysis by experts at Anderson Economic Group (AEG) shows that, after little more than eighteen months, the retail cannabis industry has spread quickly across Michigan. “Over 80% of Michiganders now live within a 20-minute drive of an adult-use retail store,” said Brian Peterson, AEG director of public policy and economic analysis. “Our analysis shows that the retailers have established themselves across the state in order to meet consumer demand for cannabis.”

Refer to the maps below to see the distribution of retailers across the state.

Michigan Residents in Proximity to Medical and
Adult-Use Marijuana Stores, 2020

As of early August, the Michigan Marijuana Regulatory Agency reported 413 active medical provisioning center licenses and 329 active adult-use licenses. The state’s largest cities, college towns, and popular tourist areas now offer residents and visitors multiple locations to purchase cannabis. “Not only are consumers likely to have a cannabis retailer nearby, most now have multiple retailers competing for their business, which is good news for customers.” Peterson said.

Looking ahead, Peterson anticipates that Michigan could grant 100 to 150 additional licenses by the end of the year. “The pace of new stores being licensed has not slowed since legalization,” he said. “There are still plenty of opportunities for retailers, especially in southeast and western Michigan.”

Although retail marijuana is increasingly available through retailers, a recent AEG report found that 70% of marijuana consumed in Michigan still comes from sources other than retail stores. “Many consumers are still choosing non-retail options,” Peterson said, “but we expect that the growth in retail stores could convert some consumers into retail customers.” 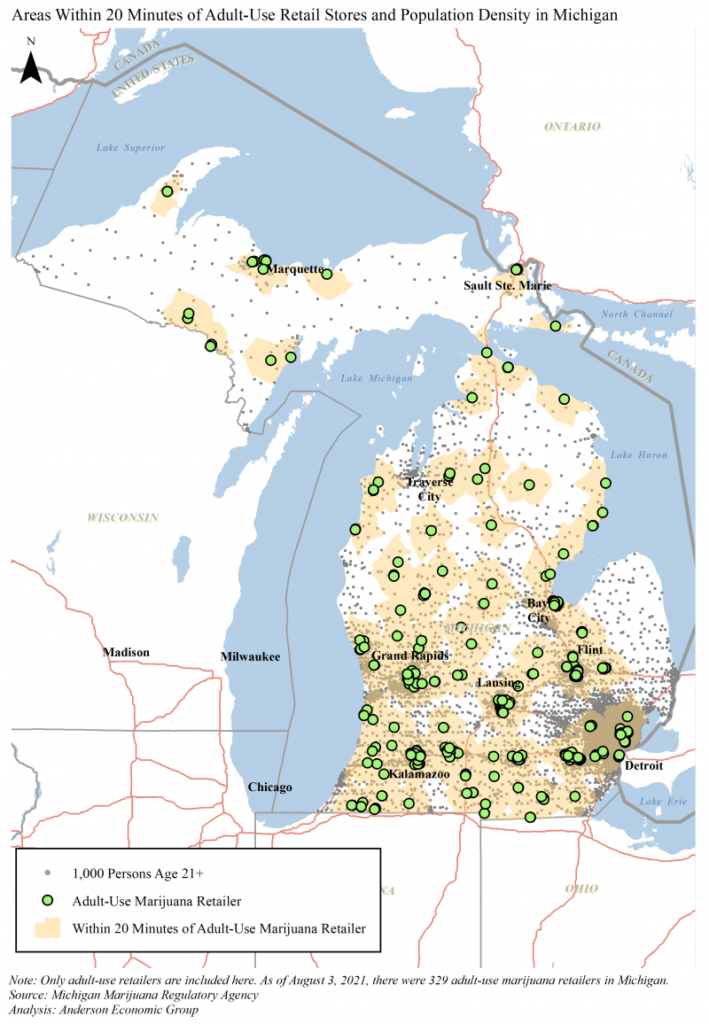 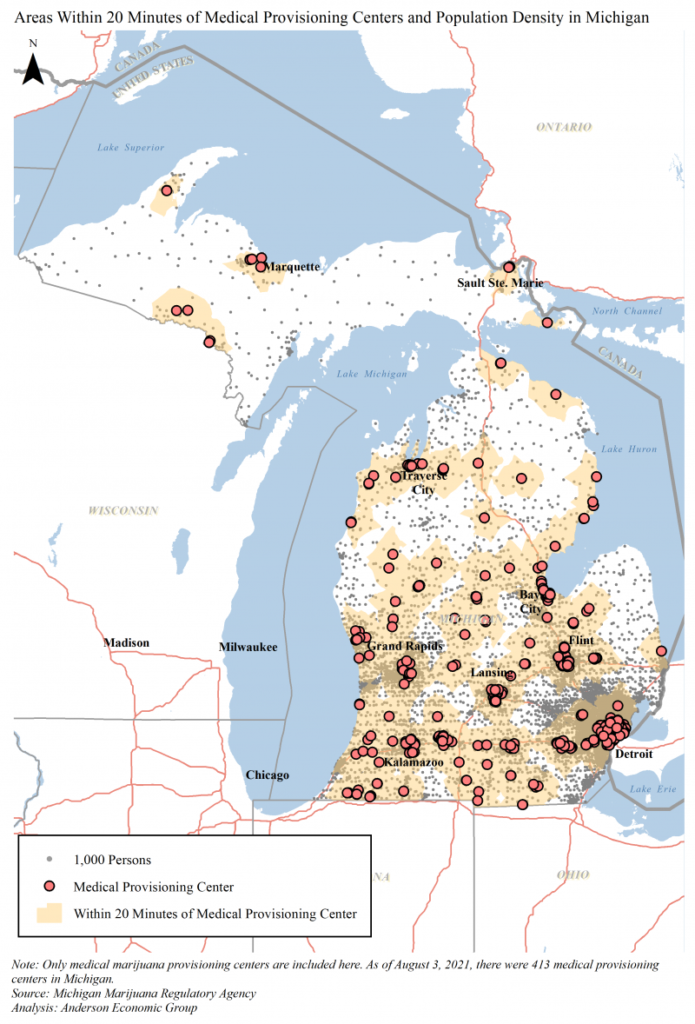 Anderson Economic Group, LLC, is a boutique research and consulting firm, with offices in East Lansing, Michigan, and Chicago, Illinois. The experts at AEG have unrivaled expertise in market and industry analysis and site selection. AEG’s public policy team has produced estimates on the size of the cannabis markets and analyzed demand for cannabis in all 50 states since 2015. AEG serves public and private clients including governments, corporations, nonprofit organizations, trade associations, and small business. You can learn more about our cannabis market expertise here.

Mr. Brian Peterson is a consultant and the director of the public policy and economic analysis practice area at Anderson Economic Group. Mr. Peterson has worked with public, private, and nonprofit clients across the country on economic and fiscal impact analysis, compensation analysis, housing policy, market regulations, and economic development strategy. Since 2019, he has also managed the AndCan® Index, which reflects observed demand for cannabis products in states that have legalized cannabis, and estimates latent demand in states where data on observed demand are unavailable. Mr. Peterson has appeared as a guest and economic expert in a number of publications, including the FOX Business, CNN, Crain’s Detroit and Chicago Business, and the Chicago Tribune.