These losses are for the period of Monday, February 7 through Tuesday February 15, and presume that normal traffic is flowing through Windsor and Sarnia, and across the Ambassador and Blue Water bridges, as of Monday February 14.

The Anderson Economic Group analysis includes lost production and wages at facilities include Delta in Michigan and Ingersoll, Brampton, Windsor, Oakville, Cambridge, and Woodstock in Ontario, as well as Georgetown Kentucky, Huntsville Alabama, and Marysville Ohio. The plants are operated by GM, Ford, and Chrysler (Stellantis) in Michigan and Ontario, as well as Toyota and Honda. For each of these, there are a set of suppliers (tier I and tier II) and transit workers that are also affected. The many supplier and transit workers include those covered by different labor contracts and those not unionized.

We estimate the following lost wages and production for this period:

“Within hours of the trade disruption at the Ambassador and Blue Water bridges, we observed shortages and then slowdowns at assembly plants,” said Patrick Anderson, Anderson Economic Group’s Principal and CEO. “Only some of that lost production can be made up given the tightness of the auto industry’s supply chain right now, so these are real losses to the men and women working in this industry.”

As stated previously, the bridge protests hit the industry in a precarious parts situation sparked by pandemic-related supply chain problems. Anderson stated that “Many of the cars that weren’t produced during the past ten days will not go to the customers that would have bought them, as those customers are already headed elsewhere or are simply going to go without a new car at this time.” 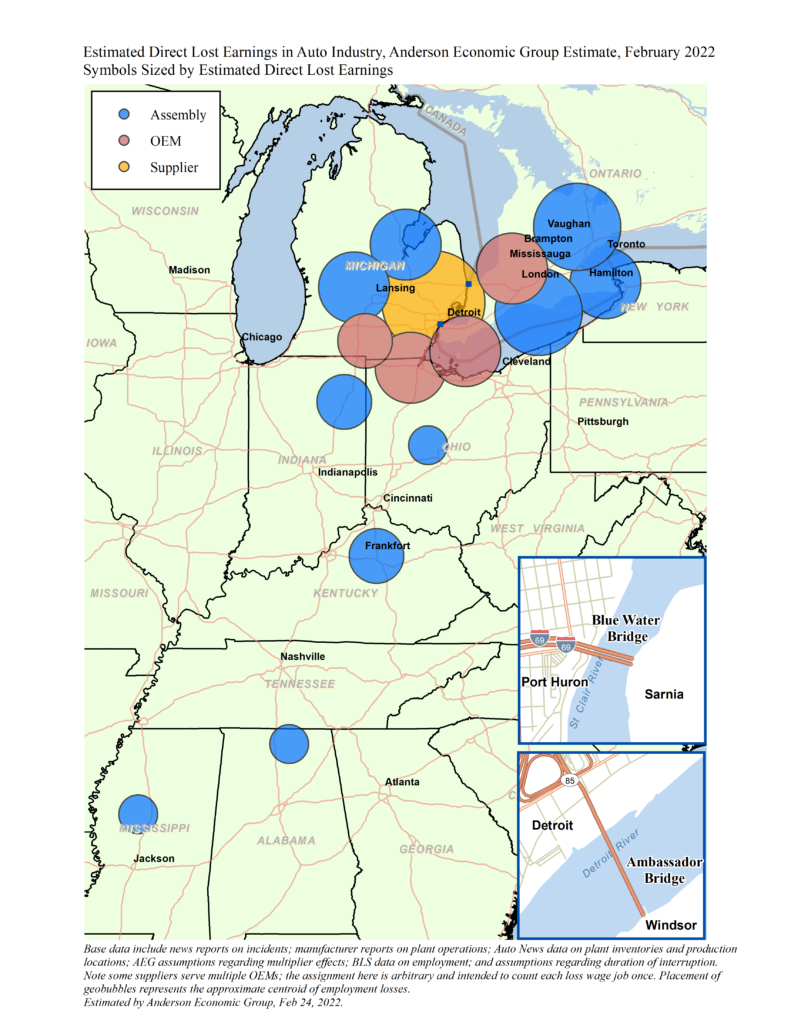 “This is quite a different situation than at the outset of the UAW strike against GM in 2019,” said Anderson. “At that time, inventories were plentiful.”

“We hope the Mayor of Windsor is correct that the bridges will now stay open,” Anderson concluded. “However, the political crisis within Canada is not yet over, and it is possible that disruptions will continue.”

Assumptions in the AEG Estimate: The estimates presume that more than 90% of the disrupted trade volume reaches destinations within a window where it can be used productively. Losses include OEMs, Tier 1 and Tier 2 suppliers, as well as transit and logistics workers for the auto industry in the US and Canada. We do not include potential losses in other industries, nor municipal costs. We also do not include any property damage, although there was no significant property damage in the reports we reviewed as of this date.

Estimating Losses: The AEG analysis follows a well-developed methodology honed during the UAW-GM strike of 2019, which focuses on the lost production at assembly plants and extends to delays at supplier and transit employers. We estimate the portion of that production that is uninterrupted, delayed, or lost. We assign lost wages and higher costs only to the portion that is delayed or lost.

Because the industry is so tightly integrated, with common ownership of many assembly and supplier plants on both sides of the border, we did not attempt to separate “US” and “Canada” production losses. Similarly, the losses to the manufacturers will be imposed on shareholders and on employees in a manner we did not attempt to estimate today.

We associate the lost wages to specific locations where the assembly and supplier facilities exist, as they are largely suffered by workers in those areas. However, some losses are suffered by residents in other areas.

For further information regarding assumptions and methodology, please see https://www.andersoneconomicgroup.com/freedom-convoy-additional-notes-and-methodology/.

February 10, 2022 – East Lansing, Michigan – Anderson Economic Group has calculated an initial estimate for lost direct wages in the Michigan auto industry stemming from the “Freedom Convoy” protests in Canada. The lost wages are due to periodic shutdowns of the Blue Water and Ambassador bridges, both crucial North American trade arteries, along with related parts shortages and reduced operations at assembly and supply plants in Michigan and Ontario.

The likely direct lost wages in Michigan alone are estimated at $51,260,000 million for the first week, beginning Monday, February 7. If the disruption continues beyond this week, that number would climb at an accelerating pace.

Patrick Anderson, Anderson Economic Group’s Principal and CEO, expressed concern for US and Canadian auto and transportation workers and their families: “This is a serious disruption with significant human impacts.” He further noted that the situation is compounding existing problems, saying “With the industry already short-handed and production lines awaiting parts, any further interruption is very costly.”

Assumptions in the AEG Estimate: AEG’s estimate is for a single week of disruption for full time employees on site and involved in transit in the US and Canada. We considered automakers including GM, Ford, and Chrysler in Michigan and Ontario, as well as those for Toyota and Honda. We include Tier 1 and Tier 2 suppliers, as well as transit and logistics workers. The losses estimated include only those in Michigan’s auto industry. They do not include potential losses in other industries, nor do they cover extra costs imposed on municipal workers.

Estimated by Anderson Economic Group, Feb 10 2022. Likely to be revised on a daily basis, and subject to considerable uncertainty, including uncertainty regarding government policies in two countries and decisions on operations and employment by dozens of employers.