August 9, 2022 – East Lansing, Michigan: An analysis by the automotive industry experts at Anderson Economic Group indicates that the “Inflation Reduction Act” bill passed by the Senate on Sunday August 9 contains at least four provisions that would negatively affect producers, buyers, and sellers of electric vehicles in the United States. They estimate that at least three-quarters of recent electric vehicle purchases in the United States would not qualify for purchase tax credits under the IRA.
“The bill is a grab-bag of taxes, subsidies, and regulations that will have far-reaching implications for auto manufacturers, dealers, and buyers,” said Patrick L. Anderson, principal & CEO of Anderson Economic Group. “Looking only at the provisions that directly affect automobile buyers and producers, we find the net impact is likely to be negative on electric vehicle sales in the immediate future.”

AEG notes that at least four provisions of the bill will negatively affect U.S. electric vehicle sales, production, or both. In particular:

Eliminating the cap on credits available to buyers from individual manufacturers would be likely to increase EV sales in the short term. However, the IRA’s removal of this cap only benefits automakers that have already hit the cap, namely Toyota, GM, and Tesla.

“Right now, a person going to a dealer to buy an EV has a very good idea if that purchase will qualify for a purchase tax credit,” Anderson notes. “Under this bill, even an expert can’t easily tell.” Under the IRA, auto dealers would end up absorbing some responsibility for explaining EV tax credit eligibility rules to car buyers.
For a surprising number of would-be buyers, these eligibility rules will not bring good news.

An Estimated Three Quarters of Recent EV Transactions Would not Qualify

AEG consultants performed an analysis of the likely effect of the IRA provisions on tax credit eligibility for electric vehicles sold in the US in the first and second quarter. They focused on 30 BEV models (battery-electric vehicles, which do not include “hybrid” drivetrain models), that account for substantially all the BEV sales in the first and second quarter. These include models from Lucid, Tesla, Ford, Porsche, Polestar, Genesis, Chevrolet, GMC, Hyundai, Kia, Audi, Nissan, Volvo, Karma, BMW, Mercedes, Toyota, Jaguar, Mazda, and VW.

AEG estimated the share of buyers whose MAGI would probably exceed the IRA thresholds. We noted that we had recently reviewed US market in the first and second quarters of 2022 and found that 77 percent of recent EV sales were in the luxury segment (see chart). 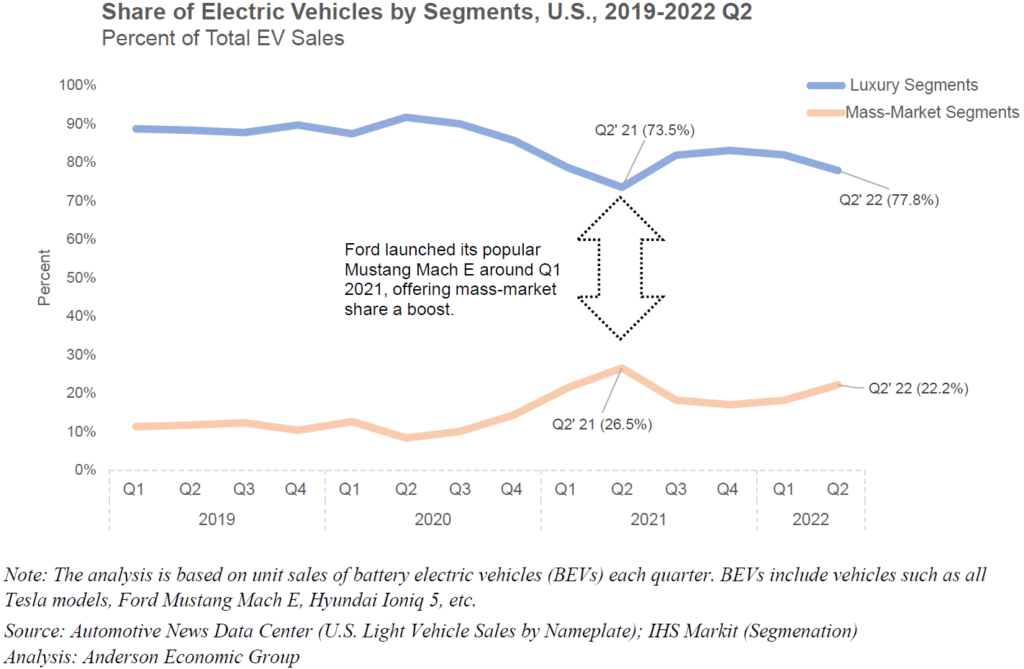 “We estimate that at least three-quarters, and likely more, of recent EV sales in the US would not have qualified for credits under the IRA,” says Anderson. “That is after taking into account the expansion of credits for buyers of Toyota, Tesla, and GM products, and liberally interpreting the battery component requirements.”

Of course, should the IRA be enacted, manufacturers would be expected to adjust their product offerings, and to some extent their production arrangements, to make as many models eligible as possible. Thus, the effect of the IRA on future models will certainly be at least somewhat different.

If we continue to think that auto buyers are influenced by large subsidies and we want to encourage a rational transition to electric vehicles,” Anderson concludes, “we should be asking serious questions before enacting the IRA into law.”