Patrick Anderson explains the implications of this strike beyond the auto industry (Detroit News editorial, 10/2/19).

Media outlets seeking the most current AEG expert analysis, interviews with Patrick Anderson and Brian Peterson, or up-to-the-minute input from our analysts should contact Lisa at 517.333.6984 or by emailing lwbooth (at) andersoneconomicgroup.com.

East Lansing, MI, October 25, 2019—Pending final vote tallies on ratification of the proposed contract between the UAW and GM, Anderson Economic Group experts have conducted an analysis of the impact upon representative employees based on seniority, job class, and wage scale. The results illustrate that lost wages and settlement bonuses vary considerably.

Meanwhile, the tentative contract’s immediate impact on General Motors would be significant. Anderson Economic Group’s Principal and CEO, Patrick L. Anderson, describes the payouts as substantial, with the automaker likely shouldering ratification bonus costs in excess of $485 million as follows:

Anderson notes that, as shown in the table above, “Michigan residents are in line to receive nearly half of these bonus monies, with a sum approaching $238 million.” He further indicates that GM shareholders will bear much of the cost of these payouts, including Michigan-resident shareholders, who will absorb a cost of approximately $58M.

Lost wages do not include strike pay, substitute work by furloughed employees, or lost earnings at dealerships. The above analysis represents conservative estimates using the consistent and documented methodology AEG has used throughout the UAW-GM strike. Bonus payouts are estimated based upon technical eligibility criteria, but actual results may vary.

East Lansing, MI, October 23, 2019—The UAW GM strike is in the midst of its sixth week as UAW members vote on a tentative agreement reached by negotiators last week.

These numbers do not include strike pay, substitute work by furloughed employees, or lost earnings at dealerships. Similarly, GM losses (and lost wages) due to the strike do not include proposed settlement bonuses to be paid after ratification.

East Lansing, MI, October 16, 2019—The UAW GM strike rolls on through week five with mounting impacts upon GM, striking workers, state and local governments, and the employees and businesses that rely upon GM’s operations for their livelihood. Analysts at Anderson Economic Group (AEG) today released the following updated impact estimates that include data through October 20:

The calculations above do not take into account strike pay, substitute work by furloughed employees, lost earnings at dealerships, or reductions in government expenditures. They were derived using a consistent, documented, conservative methodology.

In the shadow of such losses, AEG’s CEO and Principal Patrick Anderson yesterday appealed to members of Michigan’s congressional delegation to consider the possibility that elements of the Taft-Hartley Act may need to be invoked in coming days. In the letter sent to Representatives Upton and Dingell, Mr. Anderson notes that the costs for this strike far surpass those associated with the events that precipitated the Act’s last use during the West Coast’s 2002 port shutdown, and concludes:

The Taft-Hartley Act was intended to apply only when a strike or work stoppage would ‘imperil the national health or safety,’ and it appropriately sets a high bar for such extraordinary intervention into the bargaining of private parties. Given this high bar, I am writing to ask you to consider whether an appeal to the President may be warranted in the next several days.

The following pages include charts demonstrating the extent of the economic damage suffered as a result of the ongoing strike. 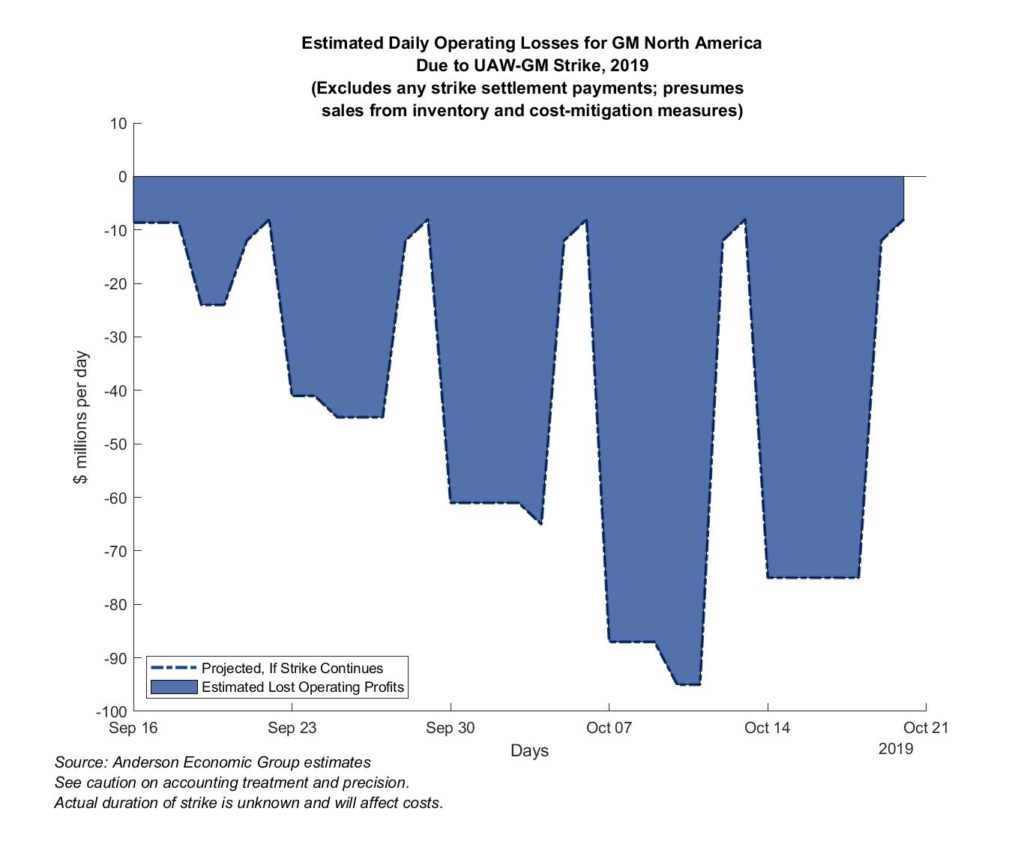 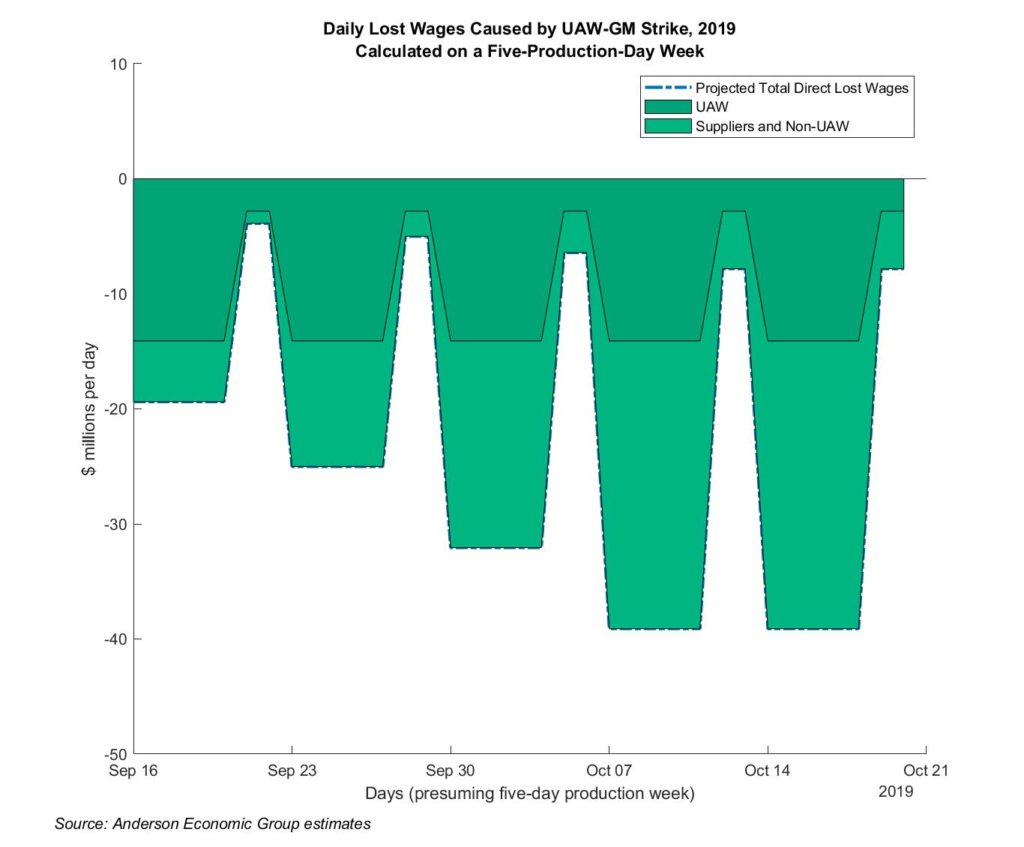 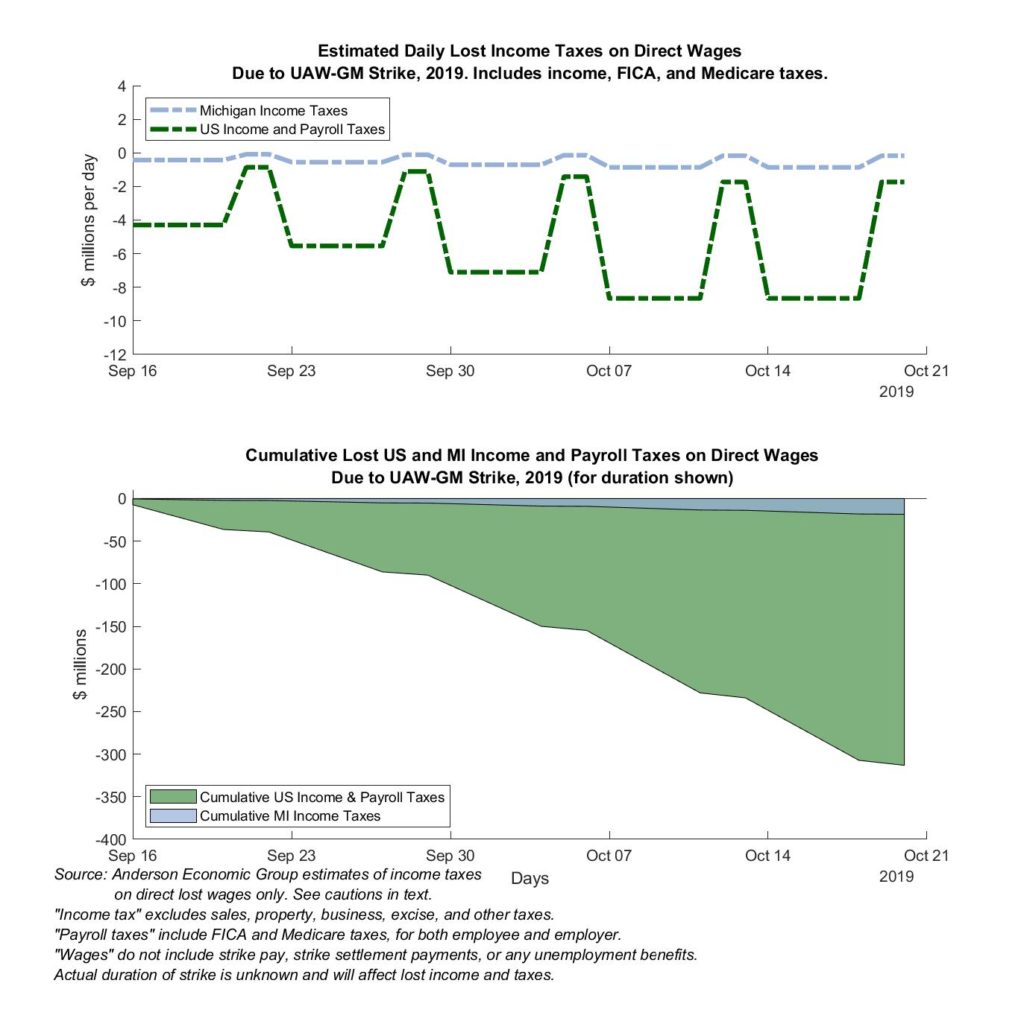 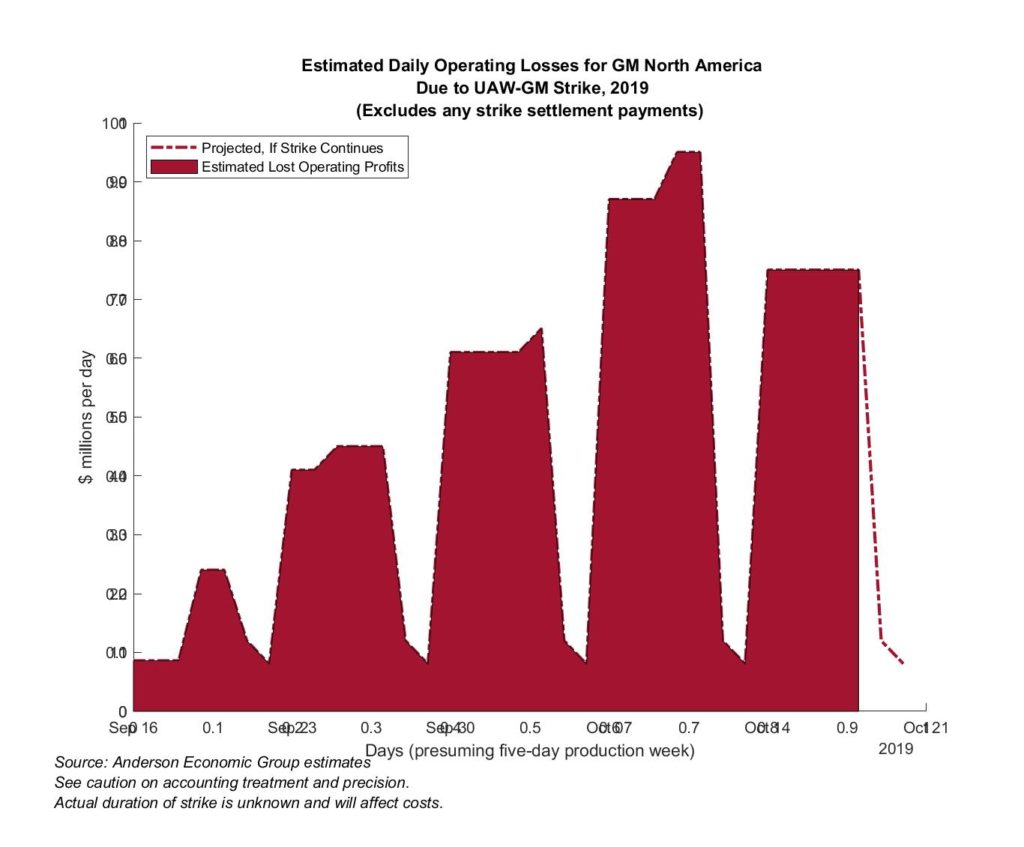