U.S. Unemployment Payments Now “Among the Largest Payrolls in the History of the World”

Multiple states now have “payrolls” in excess of $800 million per week to unemployed workers, dwarfing the national payrolls of many of the largest U.S. corporations

East Lansing/Chicago—Amidst a wave of unprecedented unemployment claims, AEG experts have estimated the value of weekly unemployment benefit payments made to unemployed individuals by state. Estimates show that some states are now pumping nearly $1 billion in weekly payments into their economies through their unemployment insurance programs–a staggering total that dwarfs the weekly payrolls of many private sector businesses. These benefits include a state payment, as well as a $600 weekly federal supplement under the CARES act.

The Anderson Economic Group estimates are based on insured unemployment and claims figures released by the federal government in the last week of April. New unemployment claims figures–to be released today–are almost certain to push the number higher. Multiple states have crushing unemployment as a share of their overall workforce, including Michigan, Pennsylvania, Washington (over 20% in mid-April), as well as New Jersey, Massachusetts, and California, and New York (all over 15%).

“We estimate that the effective ‘payroll’ of state unemployment offices is now in excess of $16 billion per week,” said Anderson Economic Group Principal and CEO Patrick L. Anderson. “States are quickly becoming one of the largest sources of household income in the country. The scale and magnitude of these benefits is changing the way Americans view work during this coronavirus depression.”

AEG experts estimate that the average weekly unemployment insurance check is nearly $1,000 per claimant, consisting of $370 in state payments plus an additional $600 from the federal government. With 20 million unemployed Americans, and over 17 million among the “insured unemployed,” total weekly payments to workers are roughly $16.7 billion.

Figure 1 Estimated Value of Weekly Unemployment Insurance Payments as of May 6, 2020 (click to enlarge) 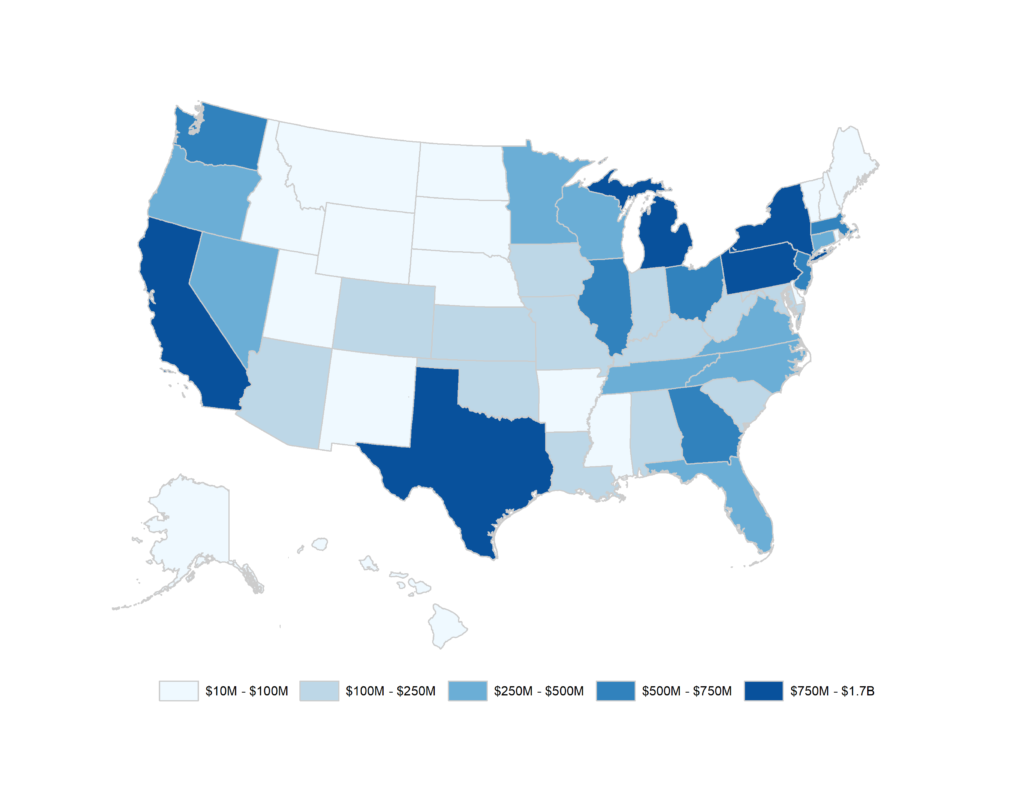 Source: Anderson Economic Group analysis of base data from the U.S. Department of Labor.

This analysis was completed by the same team that accurately predicted—in mid-March—the enormous number of unemployed that would be counted in April.

In addition to analyzing these states overall, AEG is providing regional analyses for metro Chicago in Illinois, metro Fort Wayne in Indiana, and for several Michigan counties and metro areas. As with prior analyses from Anderson Economic Group, these results are based on fully disclosed data sources, a written methodology, and a clear statement of known limitations in both the data and the models used.

“Overall, we are continuing to see a downward trend in the first wave of COVID-19 in the Midwest,” said Brian Peterson, Anderson Economic Group’s director of public policy and economic analysis. “Knowing where we are in terms of new cases and what could happen in the future is a critical first step toward easing stay at home restrictions and reopening portions of the economy. The pandemic is still a major concern, but our data and forecasts suggest that things are beginning to turn around.”

Over the last week, Illinois experienced several days of new highs in daily reported cases for the first wave of the COVID-19 epidemic. Nevertheless, we expect to begin seeing a downward trend in cases in the coming weeks as the infection rate across the state has slowed. Trends are similar in Chicago, which has roughly two-thirds of Illinois’ confirmed cases.

In Indiana, modeled cases in the first wave of COVID-19 peaked in mid to late April. Our analysts expect they will continue to trend downward through the coming weeks.

Once again, we see a downward trend in new cases throughout most areas of Michigan for the current wave of the pandemic. As noted in mid-April, Michigan’s western region (including the Grand Rapids metro area) continues to be a potential area of concern.

Signs point to a clear downward trend in cases in Ohio. The state experienced its peak new case count in mid-April, and it has since seen much lower numbers reported.

Modeling of the Covid-19 Pandemic

Since February, Anderson Economic Group LLC, together with the data analytics firm Supported Intelligence, has been gathering data from multiple countries and U.S. states to model the path of the COVID-19 pandemic. We identified the situation as a crisis as early as our February 10, 2020 release, and began releasing selected regional analyses in late March. We follow these practices in our work:

Note that data for every area continues to be updated and revised; therefore, our projections and analysis will change over time.