Award-winning Pocketbook model has uncanny accuracy record, including every election this century

East Lansing, MI—October 30, 2020: Many prognosticators are hedging their bets after 2016. However, a century of evidence shows that certain economic indicators have reliably predicted the outcome of the popular vote in U.S. presidential elections. Anderson Economic Group’s proprietary Pocketbook model has proven to be one of the best, and the firm’s economists are now ready to share the model’s predictions for 2020.

Economy Predicts Winner in 24 of 27 Elections

The Pocketbook model looks at unemployment, income growth, inflation, whether the country is at war, and third-party candidates. This economy-only model disregards poll numbers, campaign platforms, candidate popularity, and other factors. It focuses instead on underlying economic conditions that often indicate voter satisfaction with the incumbent party in the White House.

That simple model has, at this point, predicted the popular vote winner in 24 of the past 27 elections—and in every election this century (see table on the following page). “We don’t tell anyone how to vote,” said Patrick L. Anderson, co-author of the award-winning 2004 article that outlined the model, “but our model has predicted the results with uncanny accuracy over the past few decades.”

The 2020 economic picture has changed dramatically since the beginning of the year. “Had we run the model in February,” says CEO Patrick Anderson, “it would have predicted a win for the incumbent party.” In the last days of October, “the data are no longer suggesting an incumbent win.”

The pandemic recession that began in March saw an unprecedented drop in employment and output, arising from the epidemic and from shutdown orders, cancellations, and other restrictions. In the second and third quarters, employment and output rebounded, and personal incomes rose due to federal government support payments to workers, employers, and state governments. As in prior election cycles, the model estimates the 2020 U.S. economy using data for the full year. While 2020 GDP will probably contract relative to 2019, it is likely that personal income will grow in 2020 compared to the prior year—as it has in the previous two quarters.

One interesting finding that arose out of the experts’ analysis: Swing states in and around the Midwest are particularly responsive to changes in the economic climate. These states, which include Michigan, Wisconsin, and Pennsylvania, continue to draw candidates and their representatives right down to the wire. According to Anderson, “Our econometric model shows what political strategists have recently discovered: voters in certain crucial states are highly sensitive to pocketbook issues.”

Cited by Forbes Magazine in 2016 as a “best predictor of the presidential election,” The Pocketbook model was originally developed as a whitepaper published in the journal Business Economics.  The paper won the National Association for Business Economists’ 2004 Edmund Mennis award.  The model was also featured in a 2016 article in USA Today, and it has correctly predicted 24 of the last 27 elections (since 1916).

The following table shows the Pocketbook Model’s predictions and results for presidential elections this century. 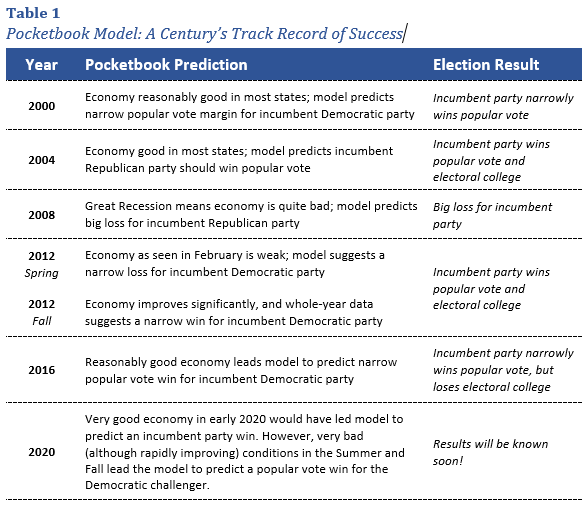 The following chart plots actual vs. Pocketbook-predicted vote differentials by state, for 10 election cycles and 50 states (plus DC). The model fits the data quite well. The R-squared statistic for this panel data regression is 74% (for this 2020 data set), which is very close to the “approximately 75%” figure quoted in the 2004 article, and an excellent indication of explanatory power. In addition, the pattern of actual-vs-fitted for the most recent elections (2012 and 2016) are very similar to those in past elections, and quite tight to the reference line.

Of course, this is a model, and one that deliberately omits important variables (like the name of the candidate and his or her positions on issues). This, and all statistical models, have prediction errors. In particular, the data show that, over elections since 1980, economic issues explain about 75% of the variation in votes across states. That leaves 25% for all other factors, issues, and signals voters wish to send. 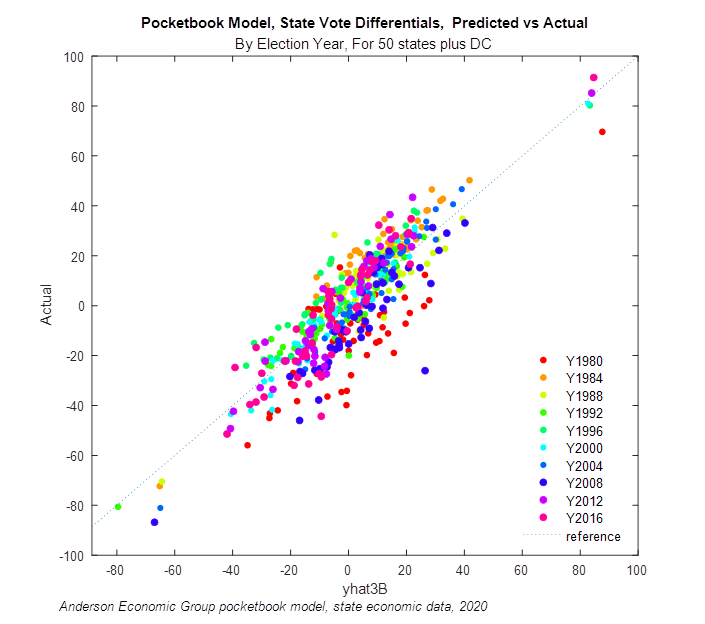 Past as Prologue, and the Weight of Expectations

2020 has been anything but a normal year, and this year’s economic downturn did not impact everyone equally. Although the model predicts the incumbent will lose the popular vote, Brian Peterson, the firm’s director of public policy and economic analysis, observed that incumbents can occasionally still win even in tepid economies, especially if those economies are improving later in the election year. “The 2012 election may provide some insight into this year’s election,” he said. “GDP growth at the start of 2012 was relatively slow, and unemployment was unusually high. Nevertheless, the economy picked up in the later part of the year and the incumbent party won the popular vote.”

Peterson also noted that, even though GDP has declined significantly this year, many voters have seen their incomes and savings increase. “This year we saw one of the largest stimulus programs in modern history, including direct payments to citizens and sizable unemployment benefit supplements,” he said. “Even though GDP is set to shrink, a good number of voters will end 2020 with increased personal income and higher savings.” The paradox of increasing incomes and declining output was a major factor behind the firm’s decision to run two versions of the model—one using actual GDP forecasts and one that tracks changes in personal income for 2020, rather than GDP.

Anderson notes that “If you look just at the underlying pocketbook issues, the economy suggests that the race will be tighter than the polling indicates.” He points to recent polls listed at Real Clear Politics, noting that 4 of the last 9 show the challenger’s lead in double digits. “That’s not what the economic numbers suggest,” he concludes. “The Pocketbook model shows the incumbent party losing the popular vote, but not by a landslide.”

Of course, voters have decided not to follow the Pocketbook model at least three times: in 1952, 1960, and 1976. Each of these elections involved extraordinary circumstances. Because the current year is also out of the ordinary, it is important to remember that no prediction is iron-clad. We will all have to wait and see how voters decide the 2020 election.

For further information, see the description of the Pocketbook Model here, or contact Anderson Economic Group, 517.333.6984.