This award-winning economic model correctly predicted the outcome of every election this century. Now, the 2020 prediction will be released on October 26.

East Lansing, MI—October 20, 2020: The year 2020 has been anything but ordinary. However, a century of evidence shows certain indicators have consistently proven reliable in predicting presidential elections in the United States. One of the best is Anderson Economic Group’s proprietary “Pocketbook Model,” which uses a handful of economic and institutional variables to predict the popular vote winner in US presidential elections.

In 2016, another famously fickle year, the Model was cited by Forbes Magazine to correctly forecast a narrow popular vote victory for the incumbent Democratic party, calling the Pocketbook Model a “best predictor of the presidential election.” The original paper describing the Model also won the 2004 Edmund Mennis award from the National Association for Business Economists, and appeared in the journal Business Economics.

Patrick Anderson, CEO of Anderson Economic Group, described the underlying principle of the model to USA Today in 2016: “As divisive, surprising and objectionable as campaigns often are, in the end voters go with their pocketbook.”

In early 2012, economists looked at the February economic statistics and calculated that then-weak economy would lead to a prediction of the incumbent party losing. By the fall, the numbers had improved enough to suggest a victory for the incumbent Democrat—exactly what happened at the polls. “The year 2012 is the closest thing we have to presaging how voters will look at a dramatically changing economy in 2020,” said Anderson.

Anderson, along with co-author Ilhan K. Geckil, found the state of voters’ wallets to be a good proxy for their willingness to return a party to power. Their “Pocketbook Model” using five basic variables: unemployment, income growth, inflation, whether the country is at war, and third-party candidates. Not included in the model are breathlessly hyped factors such as poll data, approval ratings, campaign spending, debate performances, and advertising.

The Pocketbook Model is agnostic when it comes to a candidate’s party, personality, and positions. Instead, it is a statistical model that recognizes that Americans typically vote in a way that rewards the incumbent party when the economy is good, and punishes them when it is not. The model does not constitute an endorsement of any candidate or party; it is an interesting—and often quite predictive—empirical analysis of actual human behavior. 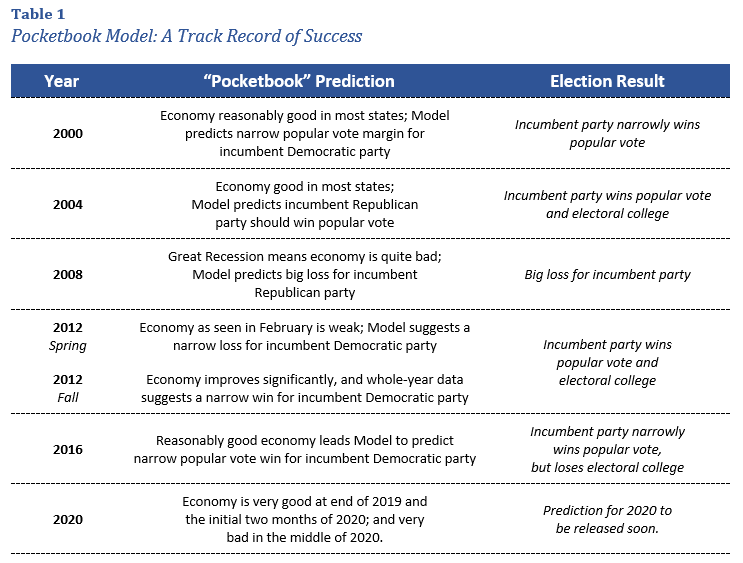 Exceptions to the Rule

Since 1916, there have been only three cases where the model clearly did not predict the outcome. In each instance (1952, 1960, and 1976), unusual circumstances seem to have driven voters’ attention away from a good economy, leading them to hand the incumbent party a defeat. In these years, the Cold War and the “we like Ike” instinct; the Kennedy charisma; and fatigue over the Watergate scandal appeared to be decisive. There have also been very close races, where the model predicts a close electoral outcome. These include years such as 2000.

AEG will release the Model’s official prediction on October 26 and will explore potential scenarios. Will voters remember those pre-pandemic highs and forego punishment for the COVID economy, or will voter fatigue combine with pessimism about the economic future to return a Democrat to the White House? Stay tuned to find out what the numbers, and the experts, predict.

Read more about the Pocketbook Model.